Put out 5 hours AFTER the bins were collected

Reported via iOS in the Rubbish (refuse and recycling) category anonymously at 19:48, Wednesday 16 September 2020 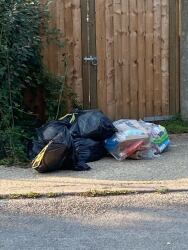 Number 29 Ocknell Grove put their bins out 5 hours after the bin men had been around. They will be all over the place by next week if they are not told AGAIN. This is disgusting, why should we have to put up with this!!!!