Reported in the Abandoned vehicles category anonymously at 19:46, Sun 30 August 2020 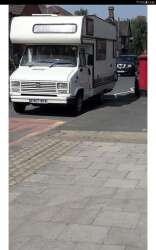 A vehicle has been parked on Nuneaton Road between the pedestrian crossing and the bus stop. In is so large it is blocking the view for people trying to pull out from Newman close and the Olde Royal Oak pub. Also the bus drivers are not able to pull into the bus zone and more importantly can't see people needing the bus until to late. There has already been two near miss car crashes because of vision of on coming traffic is greatly reduced.