Reported via iOS in the Roads/highways category anonymously at 09:32, Tuesday 28 July 2020 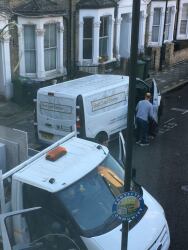 Commercial vans meeting in a quiet residential street at 6:30am. Swapping building materials and making lots of noise. Talking loudly, banging materials and reviving engines. Blocking the corner of the street making it difficult for other cars to pass. The company is called Red Sea Stone and this is a regular occurrence. They have been reported before.