Lots of rubbish around communal bin

Reported in the Rubbish (refuse and recycling) category anonymously at 13:03, Monday 15 June 2020 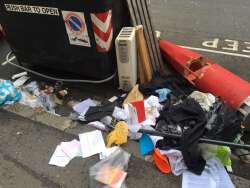 Litter all around the bin - someone has been inside the bin and gone through all the rubbish, discarding it outside the bin. They have done the same around the bin outside the International Bar at the end of Tarvit Street. I know they have been through the bin because I put one of the bags of rubbish inside it yesterday and found much of my rubbish on the street today.