Reported in the Roads/highways category anonymously at 21:31, Saturday 9 May 2020 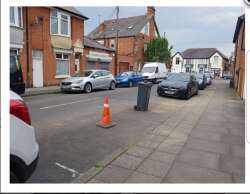 The bin and cone is there since the past few months. The resident wont move it