The Barge "Tiger Moth" loose in the river

Reported in the Abandoned vehicles category anonymously at 14:24, Fri 8 May 2020 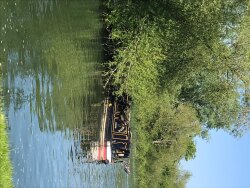 For a number of months now the "Tiger Moth" barge looks like it has been run aground on the island in the middle of the river - windows open, rear door open. Is the owner aware? Is the owner in it?? It looks like something is wrong.