Reported via iOS in the Parks/landscapes category anonymously at 15:02, Friday 17 January 2020 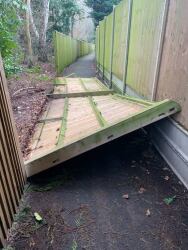 As above can’t pass. Loads more almost over along the footpath as well. Reported previously and rather the fixing was just pushed back the other way. Lucky no one was walking past when it fell!