Reported via iOS in the Rubbish (refuse and recycling) category anonymously at 08:41, Tuesday 14 January 2020 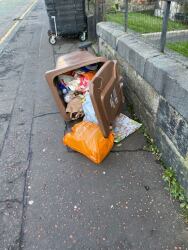 Garden wasre bin being used for general waste, on street for several weeks & now been blown over on street