Reported via iOS in the Rubbish (refuse and recycling) category anonymously at 18:22, Wed 4 December 2019 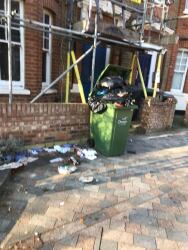 A green bin has been left for over a week as it looks like the bin men won’t collect it. In the meantime it’s attracting vermin and foxes and making a mess of the pavement