Reported via iOS in the Traffic lights category anonymously at 11:00, Thu 28 November 2019 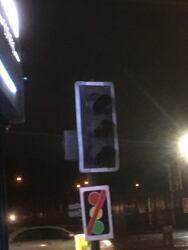