Reported in the Pavements/footpaths category by Natalie pluger at 17:48, Thu 7 November 2019 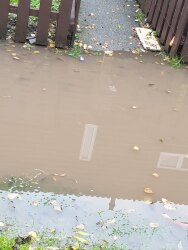 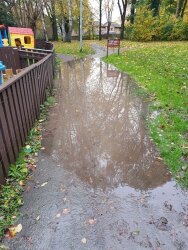 Flooded no drainage system in place contractors keep getting sent out to drain it but no drainage So overflowing neighbours can’t get out of their own houses having to lift prams over fences into my garden so she can take the kids to school! Elderly people have now falling over we’re having to apologise to people walking past it’s been going on for 9 years now and nothing is being done. The pictures I have attached that was after we had brushed water down the other end into the car park so number 36 could get back into her property. Since that picture it’s been torrential rain so it has gone 10 times worse I’m having to come in my house threw the back door.. the amount of footwear I have had to throw or wash constantly because of it is a joke.. also it comes in and out of our houses which my stair carpet is ruined because I have a child myself ! If this isn’t sorted ASAP I will be taking it further.