Reported via iOS in the Abandoned vehicles category anonymously at 13:44, Wed 23 October 2019 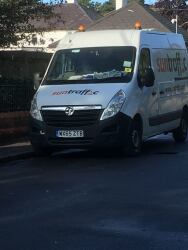 There has been a van parked in Cold Harbour Lane for some weeks now. It is parked on the road between Brickersbury House and The Fox In Pub. It has not moved at all for several weeks and never seen anyone getting in or out of it. Seems to be littered with rubbish inside.