Sent to Hackney Borough Council less than a minute later 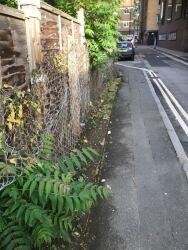 Bowling green walk should be a nice passage to and from Hoxton square but one side of the street where housing meets the pavement is really broken and needs replacing from Chicken wire fence to proper railings. Also the brick work at the bottom is broken and falling into the street. It would be nice to see a nice tidy job here to keep up with the other buildings like the circus training building and luxury flats