Reported in the Roads/highways category anonymously at 15:51, Thu 17 October 2019 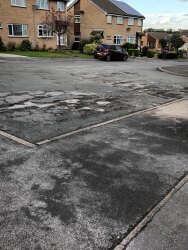 Several deep potholes and at least 30% of the road is poorly surfaced with parts warn away. There is loose surfacing which could potentially be dangerous as we approach the winter months. Ideally needs part resurfacing. The issue has been made worse by large lorries using the road as part of the gas works that have been completed, this has made the road condition far worse and has exacerbated the already bad road surface.