Reported via Android in the Pavements/footpaths category anonymously at 15:29, Sun 6 October 2019 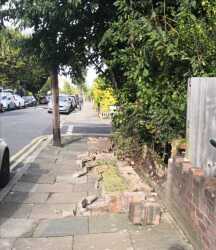 This wall has been crumbling for ages. It's now all over the pavement. This is the same house where their bushes and trees block the pavement on Union Rd. Nothing was done about that and it's almost one year since first reported. An elderly person lives here and cannot manage the property. It still has a broken door and smashed window from two years back.