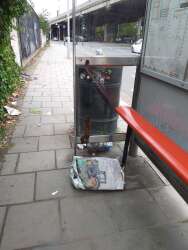 So much rubbish, bin is full, extra bags dumped, and generally unkempt eg which ivy overhang makes it hard to use the shelter and weeds