Reported in the Car parking category anonymously at 19:29, Tue 1 October 2019 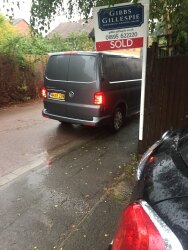