Reported via Android in the Abandoned vehicles category anonymously at 15:05, Sun 29 September 2019 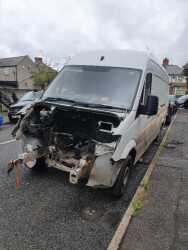