Car been left abandoned on Charlbury Road. Been there for weeks

Reported in the Abandoned vehicles category anonymously at 11:39, Sat 28 September 2019 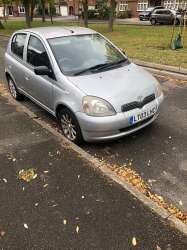 Theres been a car left on Charlbury Road for the past few weeks now. I presume it's been abandoned as no one has touched or moved it for weeks. Most houses here have drives so I presumed if it was a local person they would have left it in their drive so making the assumption it's been abandoned