Reported in the Pavements/footpaths category anonymously at 09:42, Thu 26 September 2019 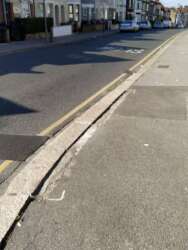 This unfinished tarmacing of the pavement has obviously been noted (suggested by the white markings), but nothing has been done about it for at least six months. It is on the inside of the bend at the top of manor road, where many people cross the road so they can see in both directions. When using a buggy or any wheeled carrier, the trough caused by the missing tarmac catches the wheels of a buggy, stopping it in it's tracks, usually with a good portion of the buggy and all of the person pushing it stuck dangerously in the road. Can this be fixed as a matter of urgency please?