Reported in the Street nameplates category by Cllr. Nick Harrington at 10:34, Tue 10 September 2019 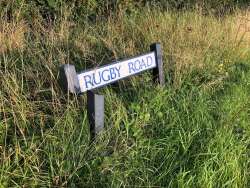 Damaged "Rugby Road" street sign opposite the former Bull In Public House on the B4453 Rugby Road at Weston Under Wetherley.