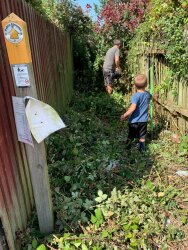 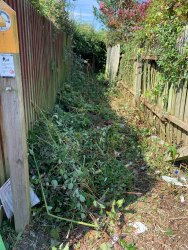 The public footpath is over grown I was told the council would cut it which they did but never maintained it. In the letter they said they couldn’t distinguish what was up-grown and what was over-growth. I have chopped everything down so I could maintain my fence but It needs to be removed which if I do I have to pay to remove the rubbish due to having a commercial vehicle. It is down to the council to maintain these paths. If it isn’t removed I will remove it and invoice your selfs for the cost of removal