Reported via iOS in the Abandoned vehicles category anonymously at 09:24, Fri 23 August 2019

Sent to Wycombe District Council less than a minute later 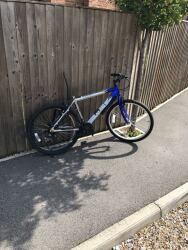 This bicycle has been abandoned in this area for about three months.

There have been numerous attempts to identify the owner.