Reported via iOS in the Rubbish (refuse and recycling) category anonymously at 13:56, Wed 21 August 2019 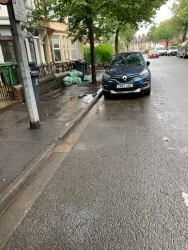 Every week, bin men avoid collecting from this house but do not sticker the bags to explain why.

This house (27 Marlborough) has been reported multiple times for refuse building up in front garden but when a few of the tenants make an effort refuse collection are letting them down.