Foul smelling bin belonging to no one

Reported via Android in the Rubbish (refuse and recycling) category anonymously at 21:44, Sun 11 August 2019 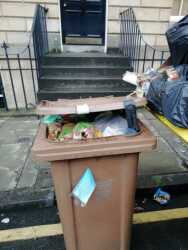 This brown bin has been outside 23 Grove Street for some weeks and people have dumped all sorts of rubbish in it and it now smells very unpleasant + people put rubbish on top of the bin as well now that it is full to overflowing and we have to clear it off.Please get this bin removed as soon as possible