Reported via Android in the Roads/highways category anonymously at 10:35, Wed 31 July 2019 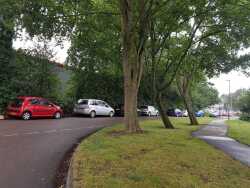 Costco has been busy since its opening and customers have parked in Meadway effectively making it one lane. This is causing danger when turning off the dual carriageway as there are often cars trying to come out at the same time. It's also increasing traffic and lots of people are trying to cross the dual carriageway. It is an accident waiting to happen.