Urgent need for a zebra crossing

Reported in the Roads/highways category anonymously at 14:01, Mon 8 July 2019 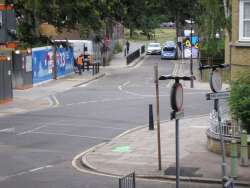 On the bend between Rhodeswell Road and Turners Road this is an area widely used by people crossing the road from heading to and from Clemence Street towards Mile End Park.

Today I witnessed a woman crossing the road with three children, two on bikes and one on a scooter. When she thought the road was clear she started to cross with her children, the two on bikes were in the middle of the road at which point the smaller child on the scooter fell over, the woman went back for the child that feel, however the other two on bikes were still on the road when vehicles approached at speed.

From Turners road a skip lorry almost run over the child on the scooter that was on the floor, the woman managed to pull her out of the way just in time as she was also trying to instruct the other two children on bikes to continue to cross the road since they were going to return.

I have reported this area before it is very dangerous and I fear it's only a matter of time before there is a serious accident. Thus there needs to be a zebra crossing. The Tower Hamlets council and / or TFL are slow in acting to ensure people's safety.