Reported via iOS in the Rubbish (refuse and recycling) category anonymously at 15:24, Mon 8 July 2019

Sent to Southwark Borough Council less than a minute later 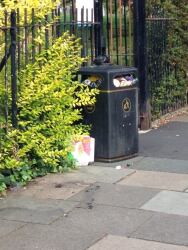 This bin is not emptied often enough and there are not enough other bins around the bridge, so it's always overflowing