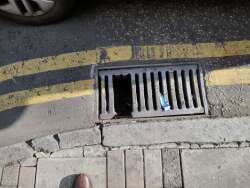 On 11 & 12 June 2019 there was a large puddle in Stoneleigh Road N17. The pooling water appeared to be getting close to the doors of the Beehive Pub and Kane Court, a newly completed building. With Martin Ball we used a bamboo rod to probe the two nearby drain gulleys. Both appeared to be blocked. More photos here: https://www.flickr.com/ photos/ alanstanton/ 48082830493/

On 17 June 2019 when the water had gone I took photos of both drain covers. The one shown above - nearer the Beehive - is partly broken and would allows entry of larger objects. Both gullies appear to need cleaning. Further heavy rain may lead to water entering the adjacent buildings.