Reported in the Rubbish (refuse and recycling) category anonymously at 17:34, Tue 4 June 2019

Sent to Bristol City Council less than a minute later 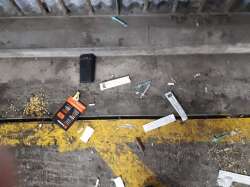 For several months now there has been constant drug litter, including used syringes, left outside the cycle cage in the Temple Gate car park. There are also often multiple drug users injecting themselves at all hours of the day and night. It is only a matter of time before something very unfortunate happens down here... Can we at least get a bin down there so we don't have to play hopsctotch over blooded syringes on the way in to work?