Reported via Android in the Roads/highways category anonymously at 13:01, Tue 16 April 2019 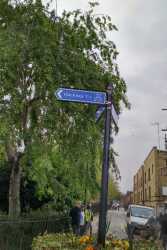 3-way cycle route sign at junction with Q13 pointing the wrong way - the sign to Hackney should be pointing north, instead it's point south along the route to the Isle of Dogs...while the Isle of Dogs/Whitechapel sign is pointing into a tree...