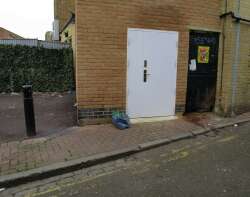 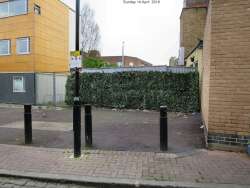 Sunday 14 April 2019. At the southern fence of the historic graveyard in Brook Street N17, Haringey Council have erected a green (fake?) hedge. It's sufficiently hedge-like to trap litter. Nearby was a rubbish bag. Also a graffiti tag on a door.