Flytipping on Tolpits Lane A4145

Reported in the Flytipping category anonymously at 10:37, Wed 3 April 2019 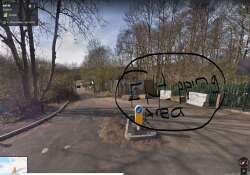 Picture taken from google maps so not showing flytipping but only showing area of flytipping.

Previously reported flytipping in this area on Tolpits Lane past the tolpits plantation but before olds approach.

It does not seem to have been cleared and now getting worse and looks like it has been added to with lots of tyres and more rubbish.

Not sure if this is private land or council land/council responsibility.