Reported via iOS in the Abandoned vehicles category anonymously at 23:03, Tue 5 March 2019 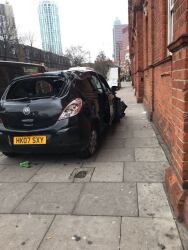 This car has been there since it crashed into the bus stop at 4am on 1 March (now five days). It’s blocking the pavement and the sharp edges and broken glass is a safety hazard. The driver won’t be returning - he fled the scene and was subsequently arrested. I’ve contacted TfL as well (it’s a red route) and complained to Lambeth Council direct. The car needs to be removed and the pavement cleared as soon as possible please.