Object previously reported as wood is actually concrete or similar

Reported in the Rubbish (refuse and recycling) category by Alan Stanton at 22:12, Wed 20 February 2019 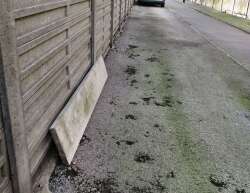 Last month, looking down the alleyway from St Loys Road N17 to Forster Road N17 I previously saw what appeared to be a wooden plank dumped there. I reported it as such. As it was still there on 20 February 2019, I went closer to have a better look. I was mistaken. It appears to be concrete or similar.