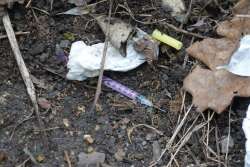 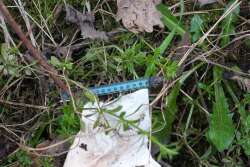 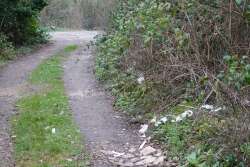 This has been reported to the police. Multiple syringes and bloodied tissues have been left approximately 10m down the north end of 'The Gore' bridleway. As can be seen in the photos, the needles are not covered which pose a risk to children and dog walkers. Close by there are empty drug blister packs, condom wrappers, empty NOS canisters and balloons. Fly tipping is a regular occurrence in this location but I have never seen drugs before.