Reported in the Flytipping category anonymously at 08:33, Tue 9 October 2018 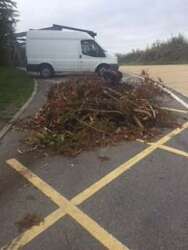 I First reported this fly tipping to Rushmoor BC in Aug 2018, they have ignored it since saying it was Hart's problem. They say it's Rushmoors'. Boring!!! Why do you think these people tip where they do, could it be because its on the boundary of two BC's! Anyway, please get it cleared up.