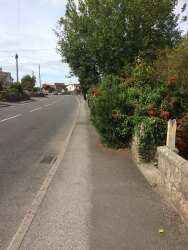 The hedge at no’s 23/25 is over hanging the pavement, obstructing at least half of it. It makes it difficult to pass other pedestrians and difficult for pushchairs etc. It is full of wasps (possible nest) which is another hazard in itself. It has been like this for months no attempts by the owners of the property have been made to cut it back at all.