Reported via Android in the Road traffic signs category anonymously at 20:28, Thu 23 August 2018 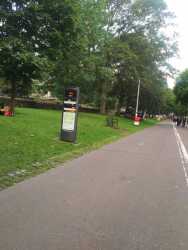 The cycle counter on middle meadow walk isn't recording when cyclists pass. Giving inaccurate information about the number of cyclists in edinburgh.