The company carrying out the replacement of the gas mains have left no access for emergency vehicles also they have damaged third party services. When questioned they replied not our problem 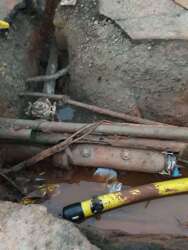 They have not left enough space for an emergency vehicle to enter the street. Also they have broken numerous ducts of other services and damaged the cables. When asked would they contact the company's affected their reply "Not our problem" .... Firstly how did a company with such a lapse attitude get permission to dig. Secondly will they be held accountable for the damage they have caused to the underground ducts or will they be allowed to get away with it and just bury the problem. Surely a small street like Orton road should have been planned better. One side at a time which would have left enough space for emergency vehicles. What happens if there is a fire or someone needs an ambulance