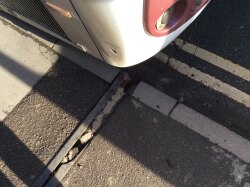 The iron gullyhas broken and vehicles are ripping their tyres on it. It’s outside The Last Bookshop, 25 Walton Street. It’s the West side pavement of Walton Street, ust south of Little Clarendon Street.