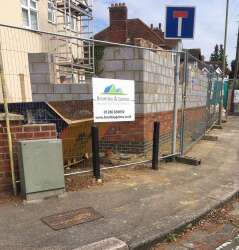 The street sign for Burrows Close on the left hand side of the road disappeared back in August 2017, coincidentally at exactly the same time as a skip was delivered behind it to the property on the corner of Wharton Road and Burrows Close. I understood that local councillor Roz Smith reported its disappearance at the time, she said she had done so on Twitter, but six months on, there is no sign of a replacement. It would be nice to know when the sign might be replaced.