Rubbish on doorstep and pavement obstruction

Reported via iOS in the Rubbish (refuse and recycling) category anonymously at 14:05, Thu 7 December 2017 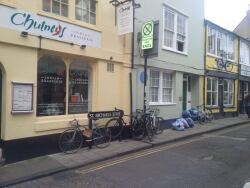 This property, a licenced HMO: 14/03543/HMOLIC, seems to have a persistent problem with rubbish sacks in the doorway and on pavement causing obstruction, with risk of encouraging vermin. Also, there appear to be bicycles associated with the property locked to every street post/light column giving rise to further obstruction.