Reported in the Carriageway Defect category anonymously at 14:13, Sat 4 November 2017 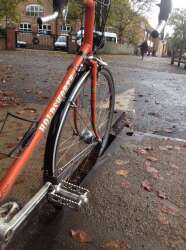 A trench has been dug in the road and temporarily covered by metal plates but there is a gap between the plates large enough to swallow a bicycle wheel. This is on one of Oxford's major cycle routes. INCREDIBLY DANGEROUS!!