Cars keep on parking in a way that blocks the road.

Reported in the Car parking category anonymously at 13:51, Sat 7 October 2017 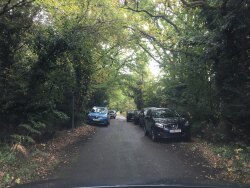 It seems to be a more and more frequent occurrence that cars (presumably visitors to St Anne's church) are parked so badly that it makes the road almost impassible for a car and definitely impassible for the emergency services. As a local resident I am concerned that if I needed someone in an emergency they would be delayed by this very inconsiderate parking.

This was taken at 12:15 on Sat 7 October. There were cars parked on both sides of the road with barely enough space to squeeze our car through.

This I think the 5th time this year that cars have been parked along this road so badly that you really struggle to get through.