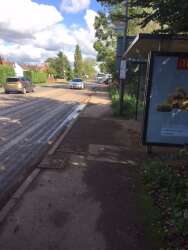 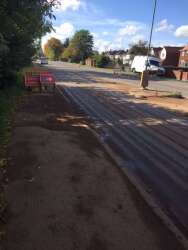 The access road on The Long Shoot for the new development, near the island (not on Eastboro Way) In addition to the large lumps of clay etc on the road that fly onto the bonnet of the car. The state of the road is filthy with dust dirt and mud from construction traffic on the road. The pavement is blocked by 2 large lorries a van and a car from the building site. There are 2 blokes in the lorry that is blocking the pavement asleep. There is nowhere for pedestrians, push chairs, wheel chair users, kids, old people or able bodied people to go. They would be unable to cross The Long Shoot as it is far too busy to cross, due to all the extra homes, exit roads and cars that are now using The Long Shoot. The directional signs 'to keep left' are totally obliterated due to dust and dirt. I would have taken more photos the amount of workers about made me feel uncomfortable. .