Reported in the Rubbish (refuse and recycling) category anonymously at 21:44, Sun 24 September 2017 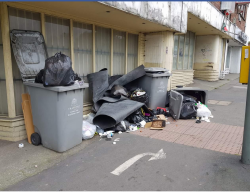 Overflowing bins and scattered rubbish which appears to have been growing for a few weeks/month. Contents make it an environmental hazard.