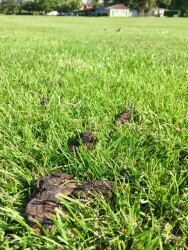 Large amount of Smelly Dog Poop left near Goal Post on Rec by Lazy Inconsiderate Dog Owner where Children play - Not good enough, remove it & place it in the provided dog poop bin which is only 50 yards away. #NoExcuses, Council should consider using Dog Wardens to issue Fixed Penalty Fines.