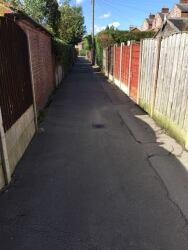 One pile of rubbish abandoned in the middle of the alleyway between Alpha road and Barton road. Building work going on near fly tipping. ?