Reported in the Parks/landscapes category by Someone who cares at 18:51, Sun 13 August 2017 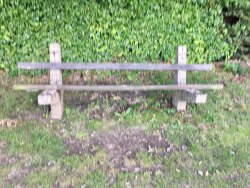 Broken & Dangerous Park bench opposite cricket pitch, one of 2-3 in poor condition at this location where people especially children could hurt themselves. Looks like they have been neglected for years which is a shame as it would be a nice place to sit & watch cricket/football/picnic.